European citizens have their say on space 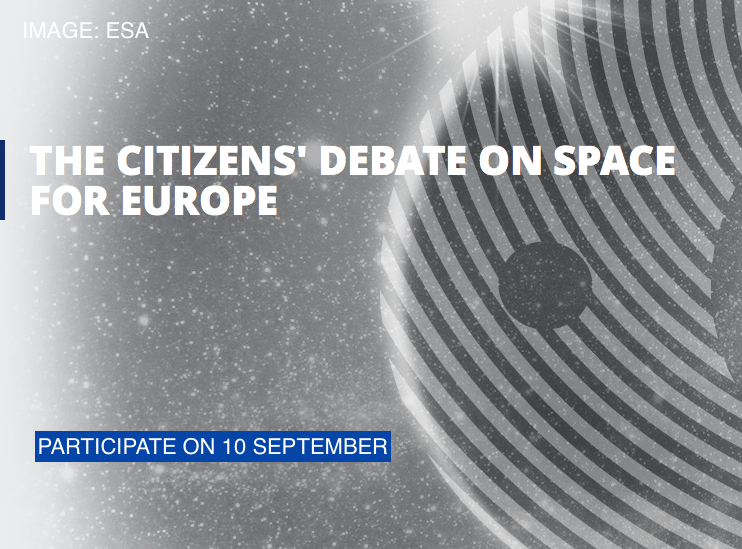 The first ever Citizen’s Debate on Space for Europe is slated to be held on 10 September and it is an unprecedented event that highlights one very important thing – that space is for everyone. The point we should probably be debating is why it has taken so long.

At the event, the opportunity to learn, debate and participate will be offered to around 2000 citizens. In this very positive move, the ESA Member States will ask their people what their priorities are on all aspects of current and future space programmes, and will gain a different perspective on what really matters to the everyday person in space. The whole event will take place simultaneously across all of the 22 ESA Member States, with around 100 people per state at various locations. Those selected will have been chosen according to socio-demographic criteria, giving a good cross section of society a say.

Space, for some, is not a priority and there is the belief that vast amounts of money are wasted on space projects that will not benefit people in their everyday lives. It is initiatives such as this that can help to bring these views out into the open and to debate them. For many of those that think that space doesn’t matter, it is also a chance to point out that space affects their daily lives far, far more than they think – and will do so even more in the future.

Enabling the laypeople to have their say is critical and I for one applaud ESA for making this debate on space possible. People do not want to feel alienated from what is going on in their country’s space agencies and yet many feel utterly detached when they should be engaged. Space agencies across the world should be doing the same thing and encouraging their citizens to look at the positives – and negatives – of their space programmes, and to air their views on how space programmes should be shaped going forward. This is healthy dialogue, and it should be encouraged. It is this kind of talking that will determine where we go in space in the future.

Never a truer word was spoken.